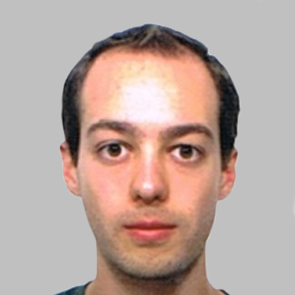 The three fates that a plastic material face at the end of its lifespan are the recycle, the thermo-valorization and burial in a landfill. Although the first option is the most preferable, an extended vision of thermo-valorization includes the pyrolysis process that allows to produce chemicals from waste polymers and that perfectly fits the circular economy concept. This work aims to simulate the pyrolysis of polyethylene performed on an industrial scale and with the help of AspenPlus© suite in order to assess its feasibility. The basis of the calculation is the rich literature about the PE decomposition as well as examples of commercial plants, which report that the kinetic constant of the radical-based decomposition reaction follows the Arrhenius equation and the first reaction order is suitable at high conversion, though different commercial PE (and so different densities) may lead to others results. In addition, TGA unveils that pyrolysis occurs between 350-500°C and does not leave residues if polyethylene is pure, while higher temperature just increases the cracking of products to C1-C2 fraction and also aromatics concentration rise. In the simulation environment, each distillation cuts has been substituted with a model molecule (e.g. decane for fraction C10-C14) in order to optimize the calculations. Regarding the setup, the first step it the drying of the raw polymer, followed by the pyrolysis reactor in which the temperature is raised by hot gases that flow in its jacket, since the reaction is endothermic (Figure 1). The latter are provided by a burner fed with methane and excess air (1 bar & 1100 °C) or by burning the gases released by the pyrolysis itself. In addition, in the first section of the jacket (13 m) the flow is counter-current while in the last one it was set a co-current flow as at higher conversion less heat is required, anyway, the average temperature of the jacket was set at 750°C. The reactor is a plug-flow type whose length and diameter are 20 and 2.8 meters, however, it was simulated a 18.5 m3 loading (about 15%) which corresponds to slightly less than 18.5 tons of commercial PE. In the case study the reactor is rotating, the radial composition was assumed to be homogeneous. Furthermore, all the reactions that occurs into the reactor can be summarized by equation (1):

where PE stands for Polyethylene, LP for liquid products, GP for gaseous products and y/z define the stoichiometry. Speaking of the results, it was found that the performance of the simulated plant is very close to the one reported in the literature, as it reaches 100% conversion with a heat duty of 3500 W vs. 3150 W of the reference reactor. Moreover, in both cases the main product is represented by the C11 fraction (ca. 1100 hg/h with a feed of 6640 kg/h of PE), though the real plant produces also lighter compounds such as methane, ethane, propane and so on while the simulated process is characterized by higher concentration of olefines (C2H4 103 vs 395 kg/h). These products can be employed directly as monomers or into well-established processes that involves oil refinery as they are indistinguishable from the gasoline cut, so being able to simulate the pyrolysis process allow to further optimize the treatment and lead to more successful scale up.

Figure 1. Diagram of the pyrolysis process