Why are phthalates a global burden? 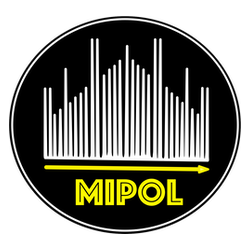 Phthalates are esters of phthalic acid. They are a class of synthetic chemical compounds produced in massive quantities and mainly used in the production of plastics, in particular of polyvinyl chloride, commonly referred to as PVC, used for the production of widely used products. 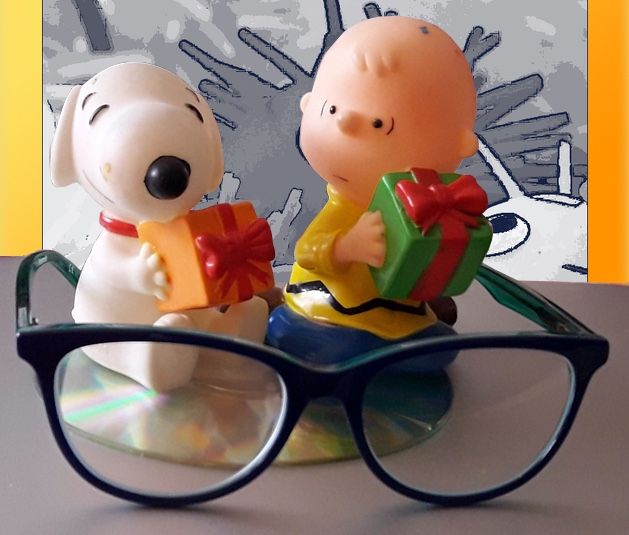 The global consumption of phthalates is generally higher than 3 million tons per year, with a growing trend linked to the increase in consumption in Asian countries. Phthalates are released into the environment and are currently considered ubiquitous pollutants. They are taken daily by humans through the food chain and various biomonitoring campaigns indicate that they are normally found in human biological fluids. Although numerous studies indicate that phthalates can be degraded by bacteria and fungi in aerobic, anoxic and anaerobic conditions, the extent of degradation largely depends on environmental conditions. Since phthalates have long been considered responsible for side effects on health, restrictions on their use have been introduced by many countries. However, the same countries hesitate to completely ban their use as they are very effective in modulating the mechanical properties of PVC and their cost/benefit ratio is particularly favorable when compared with that of possible substitutes. The analysis of the physico-chemical properties of phthalates helps to explain the role played in PVC formulations and their diffusion in the environment.

What are phthalates and what are they used for

Phthalates are the esters of phthalic acid. They are mainly used as plasticizers of polyvinyl chloride (PVC), a material widely used to prepare a variety of consumer products. The addition of phthalates makes PVC, a naturally hard and brittle polymer, flexible and durable. PVC-based products can contain up to 60% by weight of phthalates. Phthalates are normally synthesized by the condensation of phthalic anhydride with alcohols, as shown in Figure 1 in the case of di-2-ethylhexyl phthalate (DEHP), one of the most commonly used PVC plasticizers, which is obtained from maleic anhydride and 2-ethylhexyl alcohol. Figure 2 shows the structures of six commonly used phthalates whose main uses are summarized in Table 1. Their main applications are in the construction sector, food and pharmaceutical packaging, medical-surgical aids, fashion and of design. 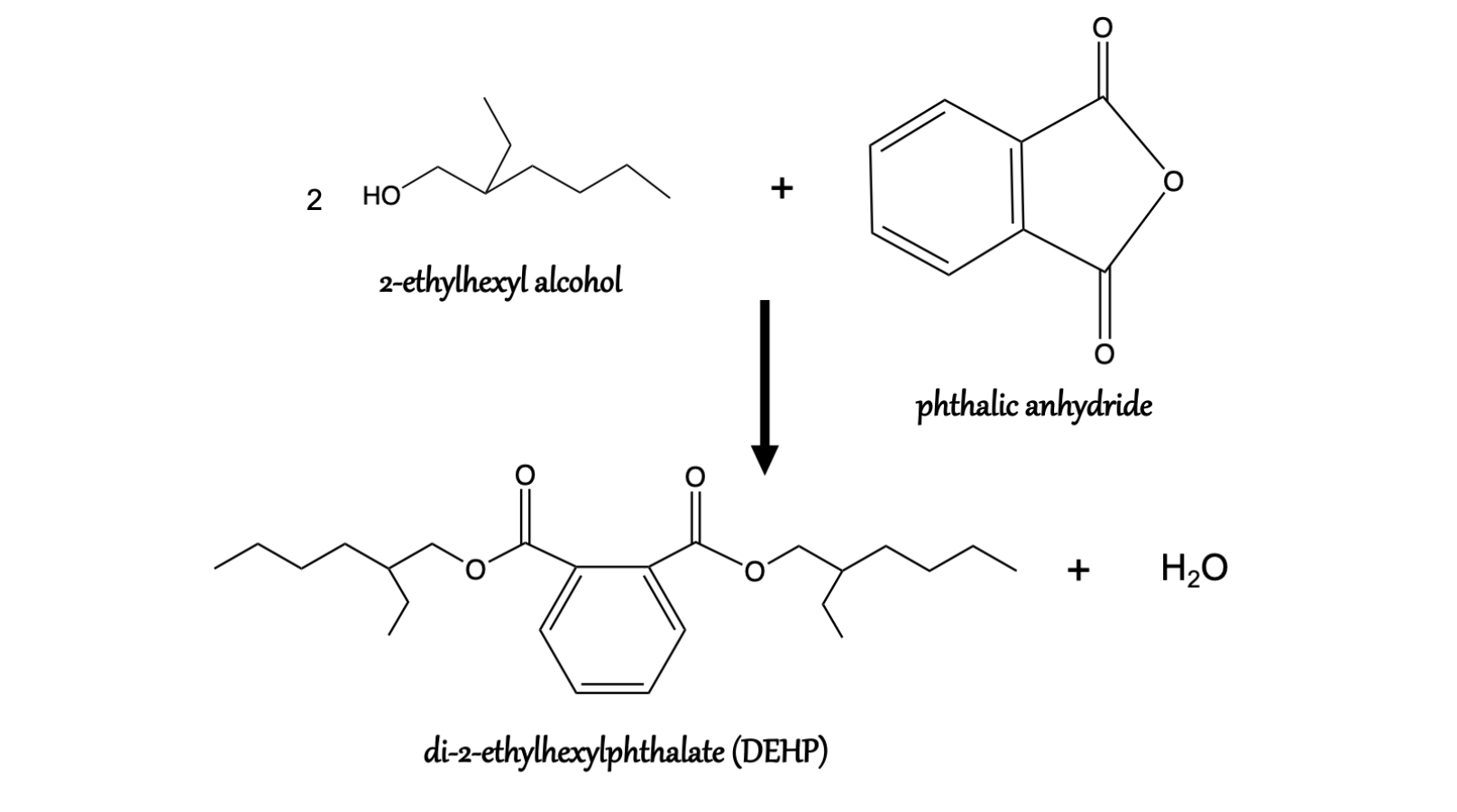 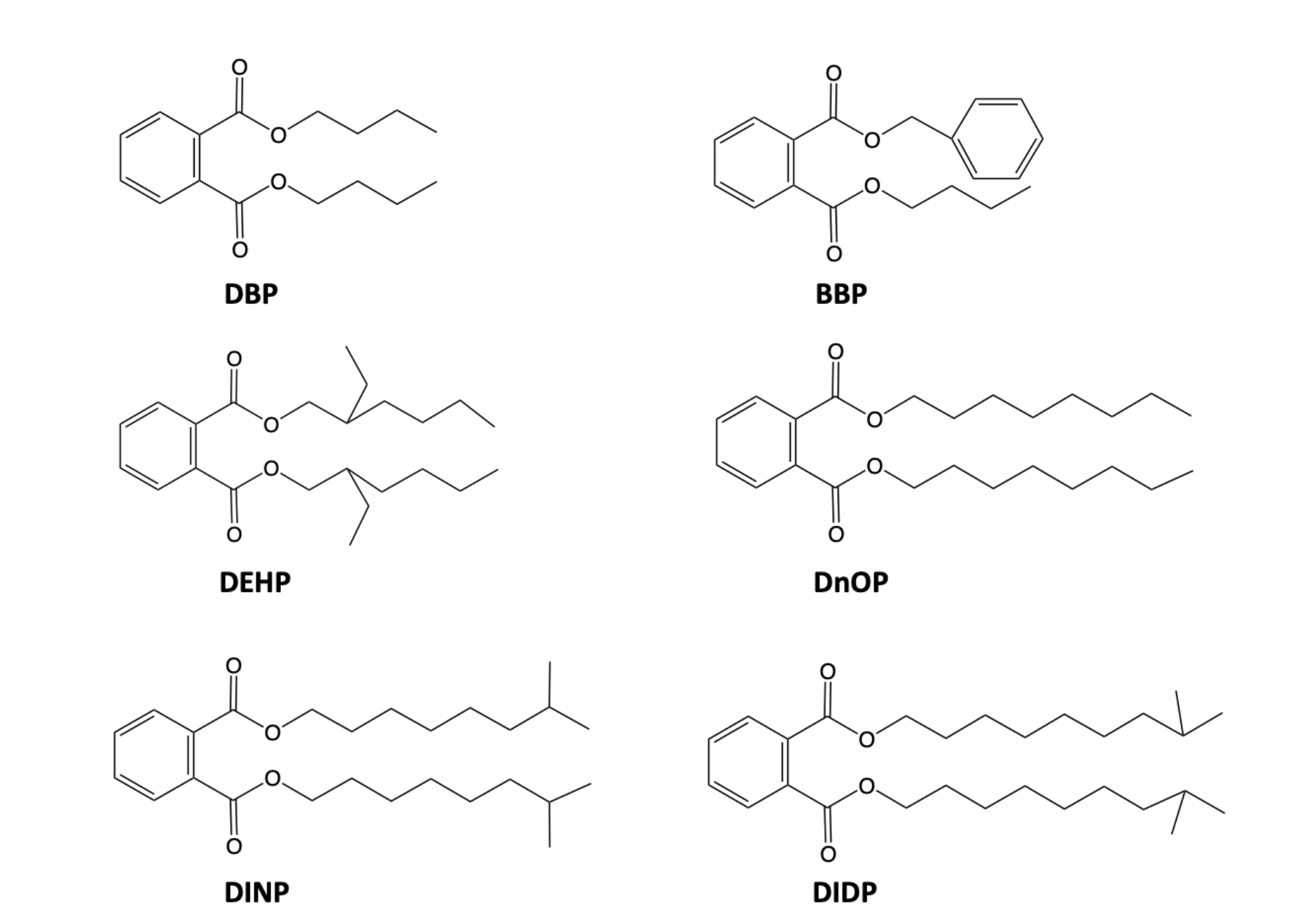 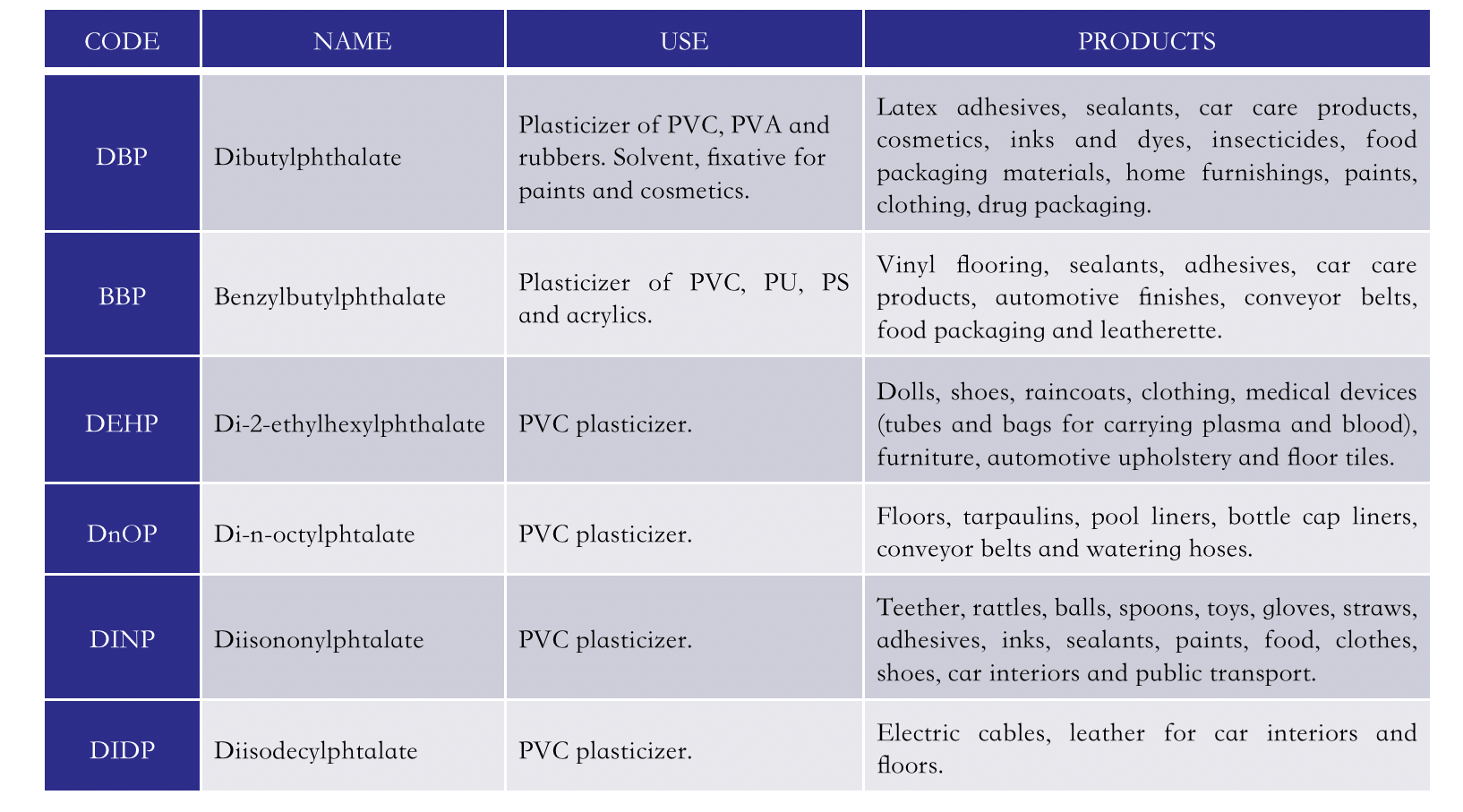 Market and consumption of PVC and phthalates

The size of the PVC market reflects the importance of the global phthalates market. Analyzing the share of the European and global market of PVC plasticizers in 2018, as shown in Figure 5, it can be observed that, while in the European market, DEHP, notoriously responsible for effects on human health, has been largely replaced by high molecular weight orthophthalates, characterized by a lower diffusivity and release from PVC formulations, the use of DEHP still prevails over that of other plasticizers globally.

Figure 5. Global and European market of PVC plasticizers in 2018. In that year, European production was 1.7 million tons, the global one 7.45 million tons [3].

Some physico-chemical properties of the phthalates depicted in Figure 1 are shown in Table 2. Phthalates are normally classified based on their molecular weight. They are characterized by very high boiling points, which increase with the molecular mass and, consistently, by very low vapor pressure values, which decrease as the molecular mass increases. The low vapor pressure explains their low tendency to be dispersed in the air and the fact that exposure to these compounds does not normally occur by air. All of them are poorly soluble in water, with decreasing solubility as the molecular mass increases. The values of the octanol/water partition coefficient, Log POW, are always higher than 4 [4], confirming a very high lipophilicity. It is well known that the lipophilicity of organic compounds determines their pharmacokinetic parameters: high lipophilicity reduces bioavailability, increases permeability in the gastrointestinal tract, through the blood-brain barrier and other tissue membranes, and bonds with proteins. It also causes accumulation in soil, sediments and fish with fatty tissues. Phthalates are soluble in polar organic solvents, e.g. chloroform, toluene, acetone, dioxane, which easily extract them from PVC. Their viscosity increases with increasing molecular mass, reducing the diffusivity through PVC bulk, limiting release. The values of the Hildebrand parameter, δH, indicate high affinity towards PVC, whose δH is 19.6 [5].

PVC is a rigid and hard polymer, with a glass transition temperature, across which the polymers shifts from a rigid and brittle behavior to an elastic one, of about 100 °C. The rigidity of PVC is linked to the strong intermolecular interactions due to the dipole moments present in the repeating units [6], ascribed to the different electronegativity of the carbon and chlorine atoms.

To understand the efficiency of phthalates in the plasticization of PVC, the properties of "general purpose" PVC formulations with DINP shown in Table 3 can be compared. 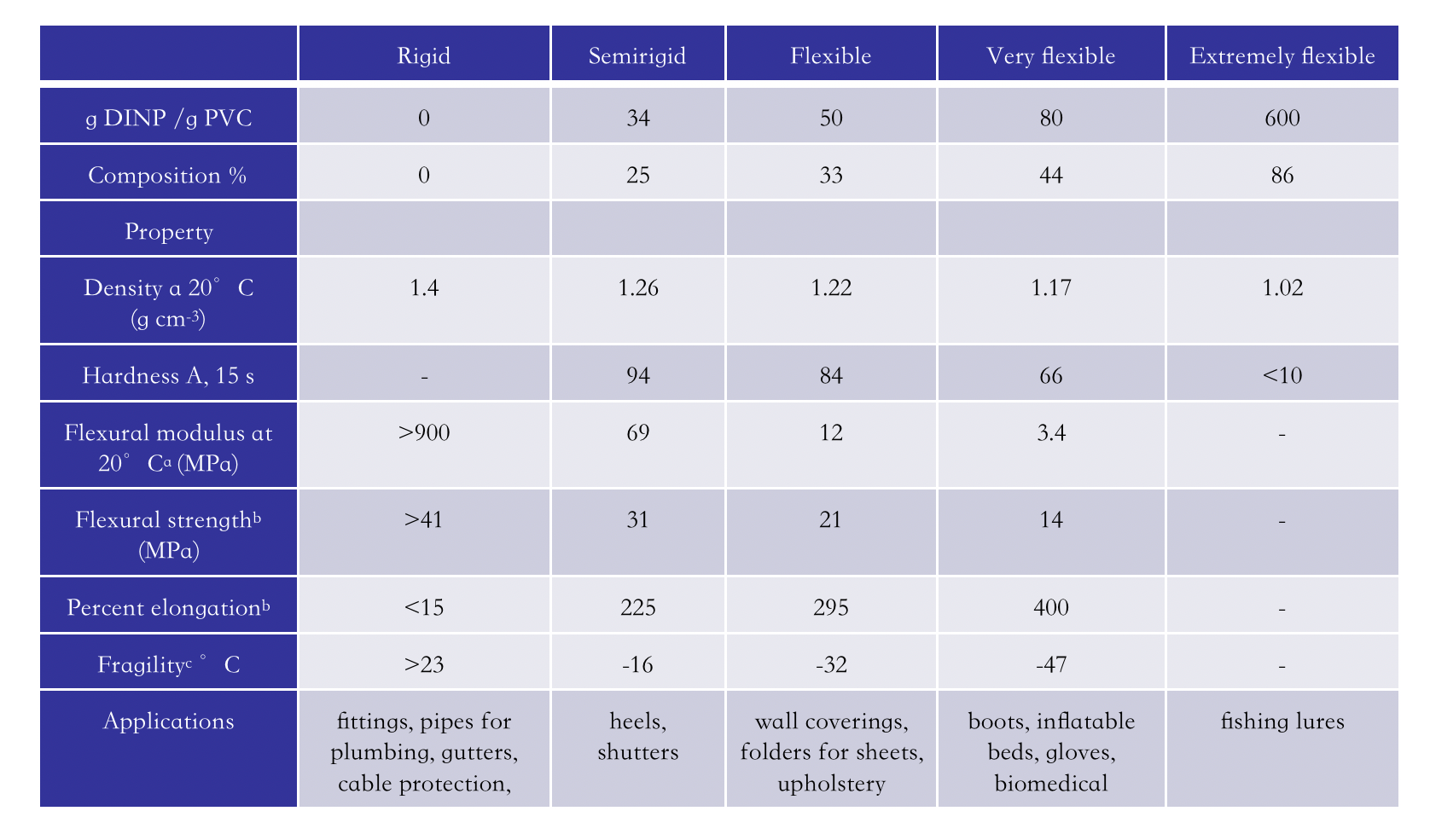 Would it be possible to plasticize PVC by chemically modifying its structure? It is known that the copolymerization technique allows to reduce the glass transition temperature of PVC by inserting small quantities of a second monomer unit in the macromolecular chain. However, the presence of other repeating units interrupts the structural regularity of the polymer, preventing the formation of crystallites, which are responsible for the development of cohesive forces inside the PVC and its elasticity. In copolymers of PVC, the greater amount of amorphous phase causes greater creep and long-term loss of elasticity.

Phthalates have a strong affinity for PVC but are not chemically bonded to it and can be released through various mechanisms, such as o surface release and diffusion by solvent extraction. Surface release is caused either by being dragged into the water, or by volatilization accentuated by the presence of air flows or by degradative and photo-oxidative phenomena as well as by mechanical stimuli. However, due to their low vapor pressure and poor water solubility of, the surface release of phthalates is usually modest. Conversely, the extraction by oils and polar solvents is an efficient release mechanism. For high molecular weight polymeric plasticizers (from ≈1,000 to> 500,000) the low diffusivity causes high permanence in PVC.

Distribution of phthalates in the environment

Over the years, the distribution in the environment [8-10] and the ecotoxicity [11] of phthalates have been the subject of numerous studies. An interesting case study is the distribution of DBP and DEHP in the rivers and regions of China [10], the world's largest producer of PVC and phthalates, which produced only in 2019 20.107 million tons of PVC and in 2013 400 Ktons of phthalates. Table 4 shows the water quality criteria relating to the presence of DBP and DEHP, corresponding to half the value of HC5, hazardous concentration-5, i.e. the concentration at which five percent of the species in the SSD (species sensitivity distribution) shows a side effect if in contact with the pollutant. The acute and chronic values for DBP, 162.9 and 12.9 mg mL-1, respectively, are higher than those of DEHP, 71.8 and 1.0 mg mL-1, respectively, showing that DEHP is more toxic and harmful than DBP. Table 4. DBP and DEHP water quality criteria in China. 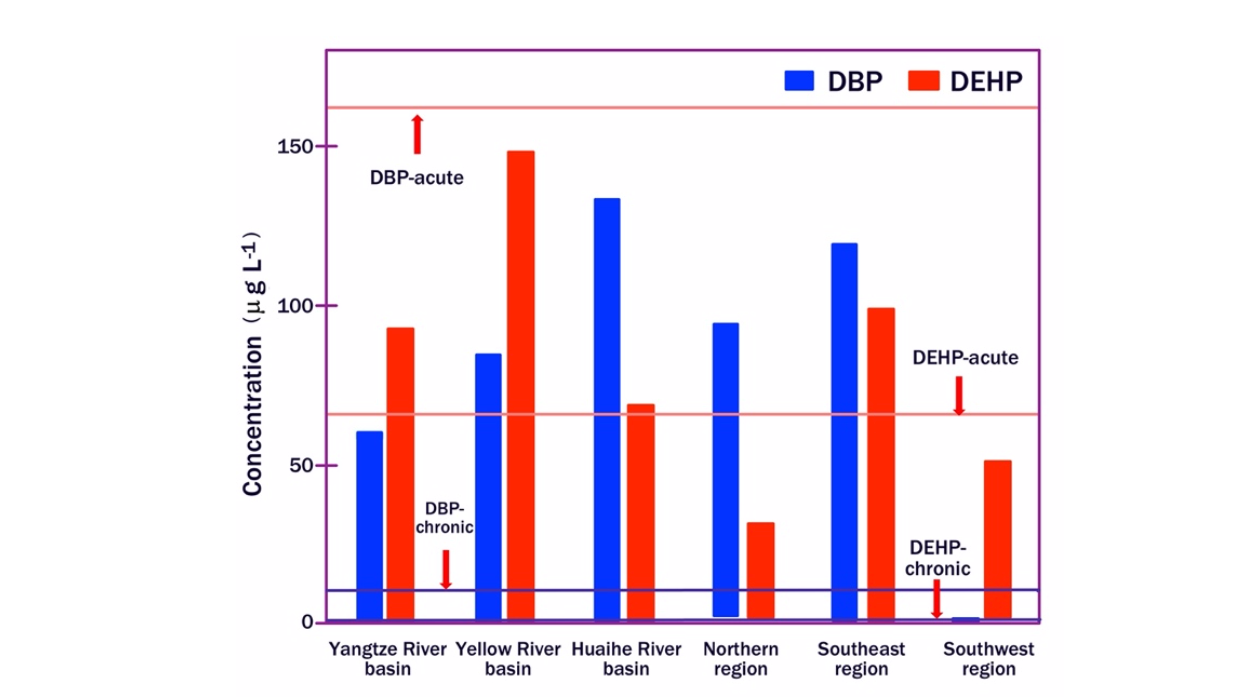 Figure 8 shows the distribution of DBP and DEHP concentrations in different rivers and regions of China, it can be seen that in that nation the acute ecological risks related to DBP and DEHP are low, while the chronic ecological risks may be ranked high. As for the biodegradation of phthalates dispersed in the environment, numerous studies show that phthalates can be degraded by bacteria and fungi both in aerobic and anoxic or anaerobic conditions [12,13]. However, biodegradation largely depends on the general environmental conditions under which the biodegradation process takes place.

Phthalates have been detected in aquatic organisms, birds and mammals. Human exposure to phthalates is believed to occur primarily through food, as they have entered the human food chain [14,15]. Phthalates are present in particular in fatty foods, such as oils, cheeses, fish, crustaceans and the daily intake in the population is estimated in the range of 5 - 10 ng per kg of body weight. Particularly exposed are children, who consume more food than their body weight than adults. Exposure through the skin cannot be neglected, due to the presence of phthalates in cosmetic formulations and nail polishes. Exposure through breathing is limited but not to be underestimated in closed places, especially due to the dust that can develop due to the abrasion of paints and coatings. In early childhood, phthalates can be acquired through toys, especially those that are placed in the mouth and sucked. In premature babies, the intake of phthalates through the tubes used in intensive care is relevant [16]. The tubes and bags for blood and plasma indeed contain up to 40% by weight of phthalates [17].

Due to the wide distribution of phthalates in the environment and the widespread exposure to these pollutants, their metabolites have been included in many biomonitoring campaigns [18,19]. For instance, in the United States, the National Health and Nutrition Examination Survey (NHANES) provides nationally representative biomonitoring data for several phthalates [18]. The indicators used are the concentrations of phthalate metabolites in the urine of women aged 16 to 49 and children aged 6 to 17. The main route of elimination of phthalates is in fact urinary excretion and their half-life in plasma or urine of humans and rodents is less than 24 hours. The results of the NHANES study relating to the period 1999-2014 are summarized in Figure 9. It can be observed that phthalate metabolites concentration has decreased over time, thanks to the introduction of legal limits to their use, remaining constantly higher in adolescents. than women. Interesting sociological correlations were also made. For example, women living below the poverty level normally have higher concentrations of phthalates metabolites in their urine than those living at or above the poverty level.

The toxicity of phthalates is mainly related to their metabolites [20]. Phthalates are rapidly metabolized and have biological half-lives of about 12 hours [21]. After cell internalization, the first metabolic step is the esterolysis to monoester phthalates. The second step is conversion to the hydrophilic glucuronide conjugate, which is catalyzed by the uridine 50-diphosphoglucuronyl transferase enzyme [22]. Short-branched phthalates are rapidly excreted in the urine after esterolysis, while long-branched phthalates undergo several bio-transformations, such as hydroxylation and oxidation, and are excreted in urine and feces mainly as phase II conjugated compounds (Figure 10). In particular, mono-2-ethylhexyl-phthalate (MEHP) causes reproductive dysfunction in female zebrafishes, which is possibly due to the alteration in endocrine activities.

Evidence of adverse reproductive and developmental effects in animals and humans is abundant [20]. Epidemiological studies have indeed shown a significant correlation between phthalate exposure and adverse reproductive outcomes in both women and men, insulin resistance, obesity, allergy and asthma. Phthalates are recognized as endocrine-disrupting chemicals and are detrimental to the reproductive, neurological, and developmental systems of humans. Children are even more vulnerable to phthalates. Epidemiological studies have shown negative outcomes on pregnancy, problems in genital development and sperm quality, precocious puberty, thyroid problems, respiratory symptoms and neurological development. They are also believed to cause lung problems caused by dust contamination.

Restrictions on the use phthalates

Restrictions on the use of phthalates have been introduced in many countries. In 1999, the European Union (EU) temporarily banned the use of six phthalates in toys: DiNP, DEHP, DBP, BzBP, DiDP and DnOP [23]. In 2001, Japan prohibited DiNP and DEHP in toys and DEHP in food-handling gloves [24]. In 2007, the EU banned DEHP, DBP, and BBP in toys and childcare articles, and DiNP, DiDP, and DnOP in products that can be chewed or sucked by children [25]. In 2018, di-isobutylphthalate was added to the restrictions in the EU countries [26]. In 2008, the US Congress permanently banned all products, including toys and childcare articles, containing more than 0.1% by weight DEHP, DBP, and BBP [27]. Australia banned products containing more than 1% DEHP that could be placed in children’s mouth [28]. In 2017 China has set detection limitations of 16 phthalates in food, food containers, and packing materials. Dissolved DEHP detected in transfusion/infusion tubing should not be more than 10 mg/mL [20]. It has been reported that over 100 healthcare institutions around the world are reducing the use of PVC and phthalates [29].

[14] The Lowell Center for Sustainable Production at the University of Massachusetts Lowell. Phthalates and Their Alternatives: Health and Environmental Concerns. 2011. Available at https://ec.europa.eu/environment/aarhus/pdf/35/Annex_11_report_from_Lowell_Center.pdf