Tyres, a path towards more sustainable elastomers from linear terpenes 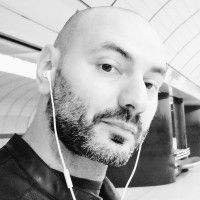 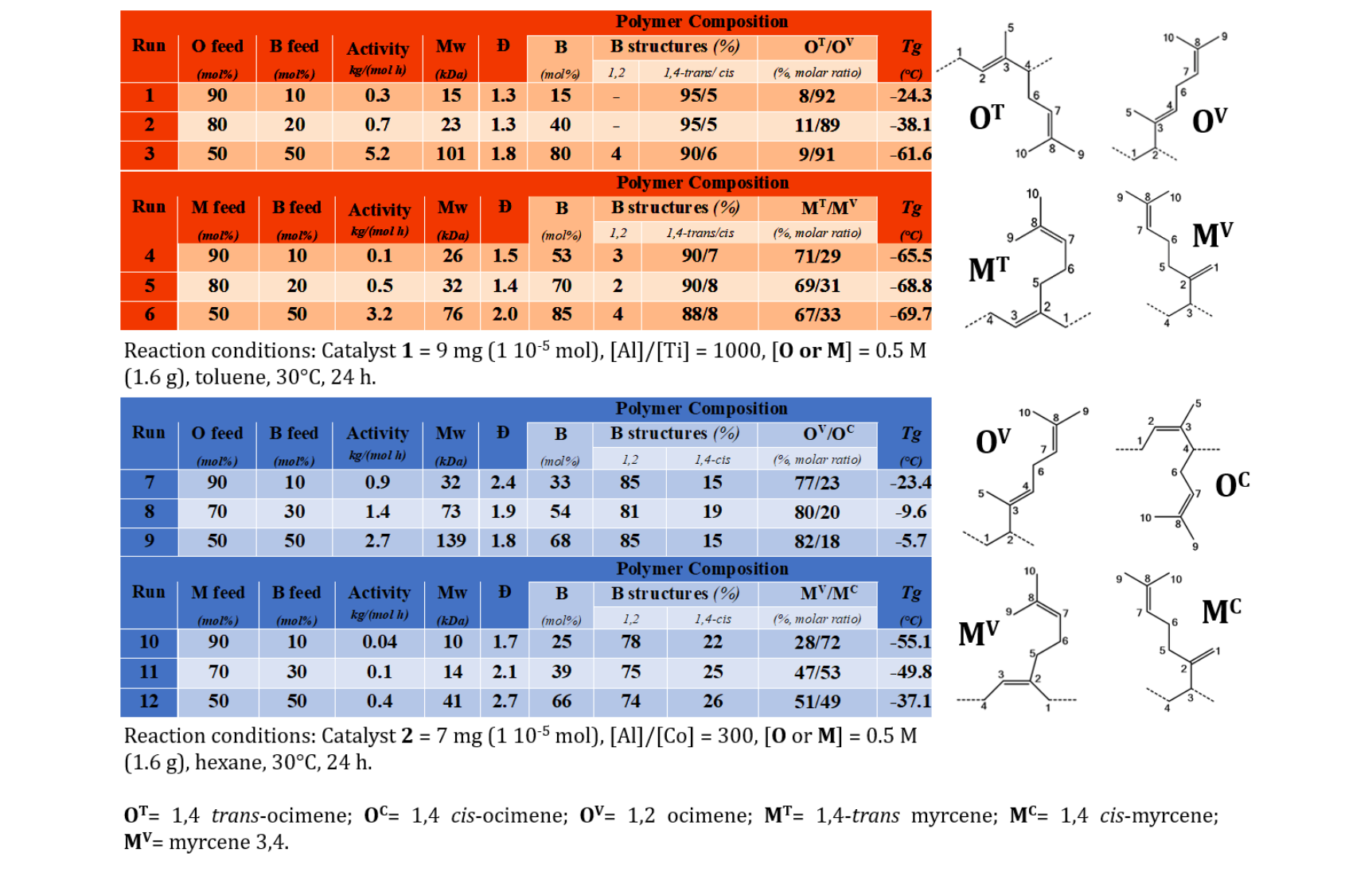 For the ability to elastically deform under stress and then almost to recover quickly the initial state (shape and size) when the forces causing deformation are removed, they have myriad applications ranging from wiper blades to spacecraft seals. Currently, 70% of world rubber consumption goes into the automotive industry for tire manufacturing [1].

Generally, rubbers are obtained from natural sources, known as ‘Natural Rubber’ (NR), or by synthesis from polymeric processes. NR, harvested from the rubber tree (Hevea Brasiliensis) by making incisions in the bark and collecting the fluid as a colloidal white suspension, is the most ancient natural polymer used in producing elastomers. Synthetic rubbers include many types of elastomers, styrene‐butadiene rubber (SBR) and polybutadiene rubber (BR) are by far the two largest volume synthetic rubber produced, being main players in the tyre industry. Both these elastomers are based on butadiene (B) which is obtained as a by-product of ethylene production from steam crackers of light petroleum fractions.

In the last decades, the production of synthetic elastomers exceeded the production of NR obtained from Hevea Brasiliensis, which is circumscribed to few climatic areas of the planet (Thailand, Malaysia, and Indonesia are among the world’s largest producers) and unable to satisfy the growing global demand for rubber (Figure 1).

Moreover, environmental worries concerning the utilization of fossil-derived commodities have pushed industries and academia towards the research of a green alternative for the synthesis of elastomers.

Fortunately, nature offers many different not fully exploited compounds for constructing advanced materials. Among all the compounds derived from biomass, noteworthy are terpenes that belong to a large family of hydrocarbons, present mainly in plants and insects, with a cyclic or linear unsaturated structure. They recently emerged as viable candidates to serve as building blocks for synthesizing a vast range of polymers, including elastomers [2]. In this context, terpenes such as β-myrcene (M) and β-ocimene (O), derived from turpentine, are valuable candidates for elastomers production due to the structural similarity to classical petrochemicals such isoprene (I) and B (Figure 2). M is industrially generated by pyrolysis of β-pinene and new developments on its production from microbial synthesis via metabolically engineered Escherichia coli were investigated [3]. O is produced from the thermal cracking of α-pinene.

Stereoregular M and O homopolymerizations have been reported to be promoted by catalytic systems based on group 3 and rare-earth metals, iron, and cobalt [4]. Surprisingly, despite the importance of B in the rubber industry, its copolymerization with these terpenes has not been performed previously.

Thus, we have achieved copolymerization of B with M and O using an [OSSO]-type titanium catalyst (1) and CoCl2(PCyPh2)2 (Cy = cyclohexyl) (2), both activated by modified methyl aluminoxane (m-MAO), in very mild reaction conditions [5,6].

The compositions of the obtained copolymers were found to be easily tailorable through judicious variations of the alimentation feed. The polymers were completely characterized through gel permeation chromatography (GPC), differential scanning calorimetry (DSC), and nuclear magnetic resonance (NMR).

Further investigations in collaboration with Pirelli have shown that poly(ocimene-butadiene) copolymers (POB), synthesized by 1/m-MAO catalytic system, could replace standard BR in a typical tread without major disruption of the compound properties, paving the way toward terpene-based elastomers as more sustainable and environmentally materials for tires.

To obtain polymers with various microstructures from linear terpenes, our attention has turned to two catalytic systems based on transition metals (titanium and cobalt) capable of providing different stereocontrol in the polymerization of 1,3-dienes. Indeed, it is known that [OSSO]-type titanium catalysts can polymerize B providing mainly polybutadiene (PB) 1,4-trans,[7] while cobalt-based catalysts have shown a unique behavior in these polymerizations giving, on the base of the ligand framework, highly stereoregular 1,4-cis or 1,2- PBs [8]. In this context, an interesting class of cobalt catalysts is those of the bis(phosphane) complexes of general formula CoCl2(PRPh2)2 (R = methyl, normal-propyl, ethyl, allyl, isopropyl, cyclohexyl). In particular, those with aromatic phosphines led to the insertion of essentially 1,2-units of B, showing an increase of the syndiotactic degree with increasing the phosphine steric hindrance [9]. Therefore, these catalytic systems looked like the ideal candidates for homogeneous stereoregular polymerization of terpenes.

Data related to the B copolymerizations with O or M, promoted by catalyst 1 and 2 activated by m-MAO, are summarized in the following tables:

Analyzing the results, Ti-complex 1 showed greater catalytic activity than Co-complex 2 in both copolymerizations. POB and poly(myrcene-butadiene) copolymers (PMB) with specific microstructural features (see previous Tables and for more details rif. [5,6]) were obtained. In principle, increasing the B feed content, yields, and molecular weights of copolymers increased. Molecular weights distributions were monomodal and narrow Ð (ranging from 1.3 to 2.7) confirmed that true copolymers were formed. For these materials, Tg values measured by DSC curves were found to be dependent on the terpene content and in the range of application of elastomers.

For all samples, 1D and 2D NMR investigation let the assignment of the main peaks. Peaks’ attribution of POB (from Table 1) is following reported as a representative example (Figure 4). A multiblock (random) microstructure was detected and signals due to junctions between blocks were attributed as well. 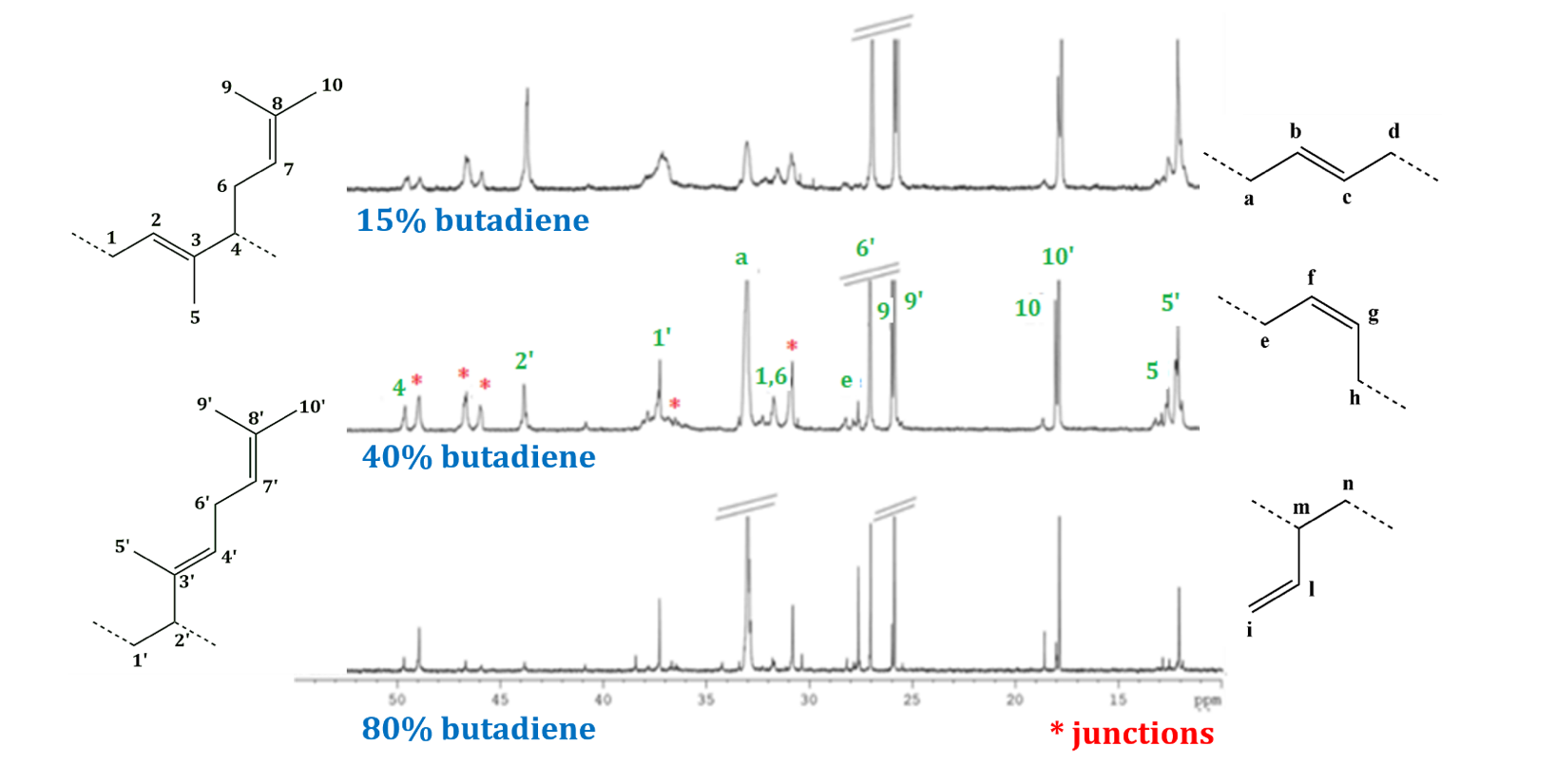 Elastomers are a fundamental part of tyres (than 40% of a tire's composition). In addition to elastomeric compounds, the other main structural components of tires (tread, body, sidewalls, and beads) are composed of steel, fabric and a variety of other raw materials including tire cord, carbon black (or silica-based compounds), curatives, antidegradants, reinforcing fibers and processing oils (see Figure 5). One of the goals of tyre research is to increase driving safety along with increasing overall performance, hopefully by using more sustainable materials.

Currently, the most commonly used rubber in the composition of the car tire compound is the SBR polymer blended with high cis-BR, while the truck tire compound is mainly composed of NR. SBR shows inferior mechanical properties, low resilience, low tear strength, and poor resistance to oil and ozone. Thus, SBR dominates in the car and motorcycle tread for the possibility of adjusting Tg and the resistance to high temperatures. Hence, NR is used 100% in the heaviest and most severe uses, such as tires for buses and aircraft.

Figure 5 - Parts of a tyre (on the left) and a typical tyre composition (on the right). Source: www.ustires.org

Test in a model tread compounds

Exploring a possible application of terpene−butadiene copolymers, model tread compounds in which cis-BR is in part replaced with our POB (from catalyst 1) were prepared. Mechanical studies of the specimens were carried out in the laboratories of Pirelli (Milan), partner of this project.

Among the various features, POB in rubber compounds decreases crystallinity, reducing its chance to self-organize and showing better compatibility with polymer matrix. Moreover, the POB compounds displayed desirable Ca 3 (load at 300% elongation), simultaneously allowing for the replacement of commercial high cis-BR in a tread without altering its mechanical properties too much. Further information and details are described in https://doi.org/10.1021/acs.macromol.9b02646

Taking into consideration the large volumes of global tire production, the replacement of synthetic rubber from fossil monomers with rubber derived from renewable resources, like linear terpenes, could guarantee soon the desirable shift to more sustainable materials in the rubber industry.