Polyaniline-oxide nanocomposites for environmental remediation: the role of the nature of the photocatalyst 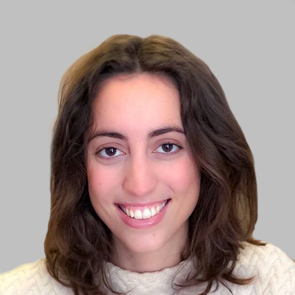 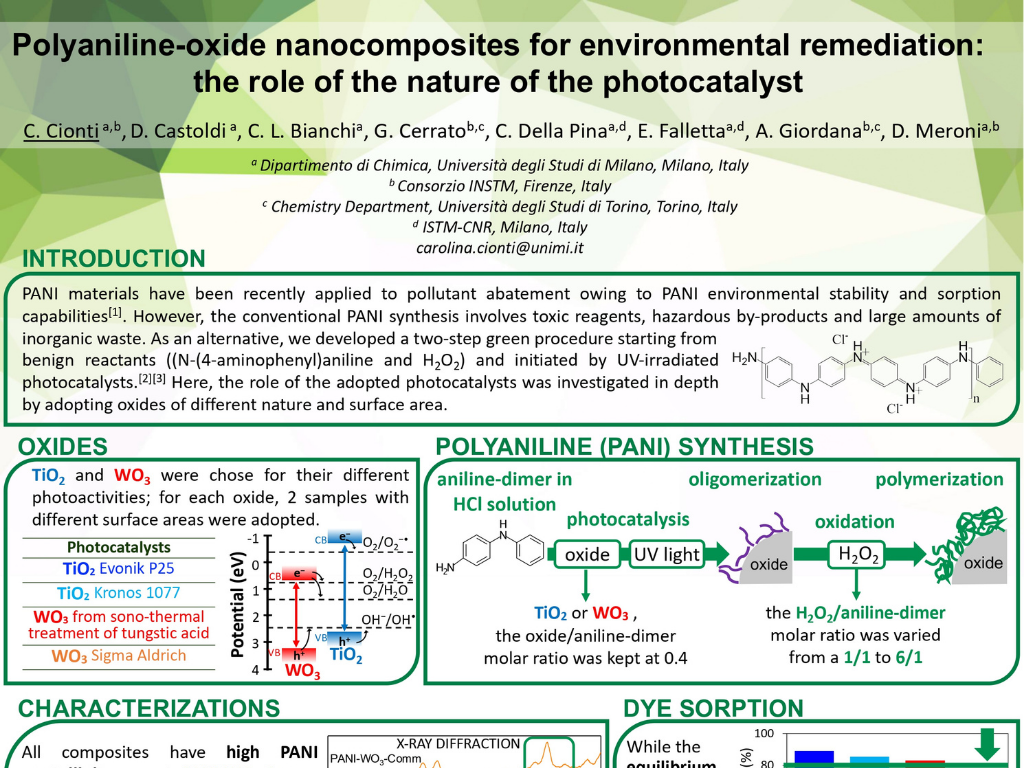 PANI materials have been recently applied to pollutant abatement owing to PANI environmental stability and sorption capabilities [1]. However, the conventional PANI synthesis involves toxic reagents, hazardous by-products and large amounts of inorganic waste. As an alternative, we developed a two-step green procedure starting from benign reactants ((N-(4-aminophenyl)aniline and H2O2) and initiated by UV-irradiated photocatalysts [2][3]. Here, the role of the adopted photocatalysts was investigated in depth by adopting semiconductor oxides of different nature and surface area: two commercial TiO2 powders (Degussa P25, 50 m2 /g, and Kronos 1077, 10 m2 /g) together with synthesized and commercial WO3 powders (3.5 m2 /g and 6.1 m2 /g). Moreover, the amount of H2O2 was varied (from a 1/1 aniline-dimer/H2O2 molar ratio to a 1/3) to investigate the reaction mechanism. The as prepared PANI-composites where subjected to an all-round characterization. All the prepared PANI composites presented a large surface area and a crystallinity degree higher than PANI materials reported in the literature. These features can be related to the twostep mechanism of our synthetic procedure as shown by the study of the PANI-TiO2 synthesis. During the first step, ATR-FTIR, XPS and ζ-potential measurements highlighted the formation and slow growth of PANI-oligomeric chains at the photocatalyst surface upon UV-irradiation. The ensuing addition of H2O2 in the second step leads to the polymer formation. On the other hand, PANI composites prepared with different oxides showed important differences in terms of PANI oxidation state and of amount of oligomers generated during the first synthetic step. Furthermore, while the amount of H2O2 plays a major role in PANI-TiO2 synthesis, leading to strong changes in the final composite surface area and polymer content, PANI-WO3 composites did not show any dependence on the synthetic H2O2 amount, underlying differences in the semiconductor-produced oxidizing species. Samples were tested towards wastewater remediation, showing good dye and heavy metal removal capacity. While a similar total dye removal capacity was observed, notable differences are observed in terms of adsorption kinetics of PANI-composites prepared with different photocatalysts, as shown by the figure on right. The sample prepared with the high surface area oxide (TiO2-P25) resulted in a faster kinetics, whereas the other tested oxides led to composites exhibiting an intraparticle diffusion kinetics, despite the similar surface area of the PANI-composites (Figure 1). These differences can be traced back to the sample morphology and oxidation state of the polymer component. 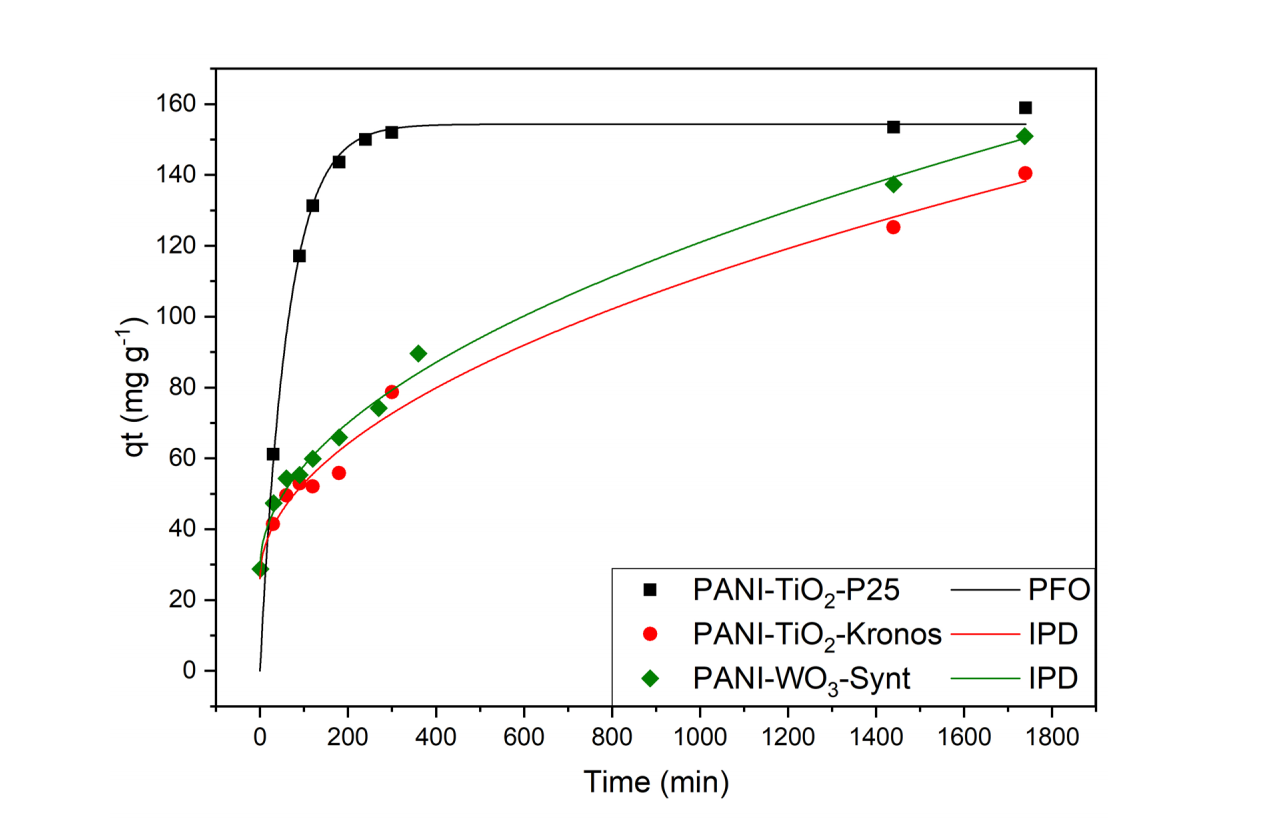 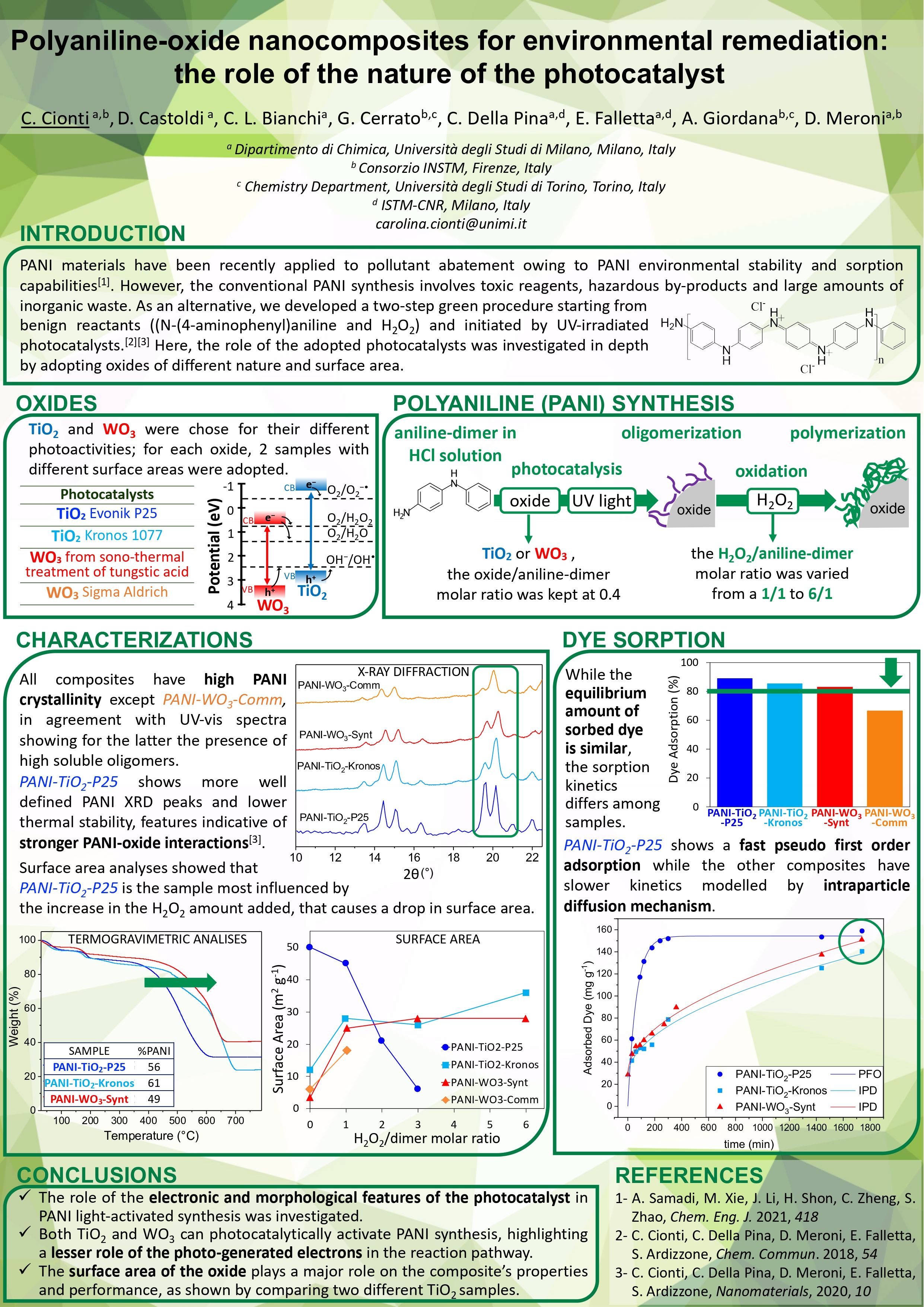