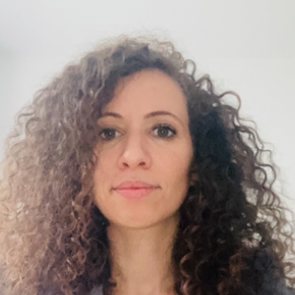 When molecularly imprinted polymers (MIP), a templating process at the molecular level, were first described several decades ago, they were mostly used as separation materials in analytical chemistry.

MIPs are prepared in presence of a template that serves as a mold for the formation of template complementary binding sites (Figure 1). The resulting molecularly imprinted polymers are being used in a wide range of applications, such as chiral separation, chemical sensing, competitive drug assays, solid phase extraction. MIPs are very interesting because their synthesis is reproducible, fast and economic, they are physically and chemically very stable, they are not easily degraded by proteases or denatured by solvents, and they can be engineered and tailored for a given application. In principle, MIPs can be obtained for any target, even when no natural receptor or antibody exists.

Another potential new application of MIPs that has attracted considerable attention is drug-controlled release. Although imprinted drug delivery systems have not reached the clinical application yet, this technology has an enormous potential for creating satisfactory dosage forms. MIPs used as a drug delivery system can keep the plasma concentration of a therapeutic molecule below the toxic level but above the minimum effective level through a controlled and progressive release of the drug.

However, the most impressive advances toward controlled release have been obtained through the combination of MIPs with inorganic materials. As inorganic nanoparticles possess interesting intrinsic physical properties like heating in response to an external stimulus such as light or alternating magnetic field, their combination with MIP leads to exceptional hybrid materials. The recent development of technologies combining molecularly imprinted polymers with inorganic core materials (quantum dots, gold, magnetic nanoparticles...) is so versatile that it allows a wide range treatment option. Like non- hybrid materials, they can be combined with a drug loading inside the polymer matrix but additional features are available when using an appropriate core material. The possibilities seem endless and are starting to be broadly explored in the literature.

It is only recently that stimuli such as UV illumination or alternating magnetic field (AMF) were employed for drug release from MIPs. In 2014[2], UV was used to induce drug release from asymmetric MIP-silver nanoparticles (Janus particles). Release of the drug from the Janus MIP particles is controlled by switching on−off the UV illumination. However, this system lacks biocompatibility due to the application of silver NPs and the limitation of UV illumination which damages cells. Therefore, there is a demand of adjustment for practical applications. Other groups have worked on triggered systems

that could release a drug upon a signal while avoiding burst effects. In this purpose, Yan et al developed a molecularly imprinted polymer doped with graphene oxide quantum dots[3] enabling the controlled release of DOX (for doxorubicin, an antitumoral molecule) through the photothermal properties of QDs. The prepared polymer micro-spheres doped with graphene QDs via miniemulsion polymerization using a polymerizable ionic emulsifier were efficiently photothermally triggered to release DOX while avoiding any leakage of the drug.

Magnetic MIP nanoparticles have emerged as a powerful material for controlled drug delivery systems because they can be localized to the delivery sites using a magnet and release the drug to particular sites by the external magnetic field. Nonetheless, few studies have been reported about the controlled release of drugs by magnetic MIPs nanoparticles. For instance, magnetic molecularly imprinted polymers were synthesized for special recognition and controlled release of aspirin (ASP) [4]. The synthesized MIPs have high magnetic responding capacity, which enable themselves to be separated from suspension by an external magnetic field. They exhibit good special binding and selectivity capacities to the template molecule. The aspirin release is slower for the imprinted polymer compared to the NIP, highlighting the interest of the imprint for passive drug release to limit the burst release effect. Nonetheless, many studies have been reported on the preparation of magnetic MIP nanoparticles [5,6] but few studies have been reported about the release of drugs by magnetic MIP. [7-9] In a recent study, 5-fluorouracil, an anticancer with fast degradation rates, loaded novel multi core–shell structure nanocarriers based on a cross linker of tannic acid has been synthesized[10]. Fluorescent images using a small animal imaging instrument confirmed the successful conduction of the carrier into the liver after the application of an external magnetic field. A series of experiments were also developed to indicate biodegradation and the biocompatible structure of the samples, confirming the non-toxic nature of samples. The slow release of the drug in pH 7.4 proved the efficiency of the carrier for cancer treatment using a magnetic field to specifically target a location inside a living body. However, the main interest of the molecularly imprinted polymer’s combination with maghemite reside in their core processing hyperthermia properties. In this context we developed for the first time an innovative magnetic MIP nanomaterial for triggered cancer therapy showing active control over drug release by using an alternating magnetic field.

Developing ways to locally treat cancer is of huge importance. However, most of the treatments used are aggressive and attacks healthy and cancer cells. That’s why developing materials that will show any passive drug release but only at the tumor place can be interesting. One solution is to combine MIPs to magnetic nanoparticles in order to activate the drug release under heating when applying AMF. Localized temperature around the magnetic nanoparticles (hot spot effect) refers to the use of specific temperature profile at the vicinity of nanoparticles for heating with minors to no long-range (macroscopic) effect.

In this context, in 2015 we developed for the first time an innovative magnetic delivery nanomaterial for triggered cancer therapy showing active control over drug release by using an alternating magnetic field.[11,12]

Figure 3. (A) Principle of drug release upon AMF using magnetic MIP. (B) Cancer cells prostatic cancer cells (PC-3) internalization of the Fe2O3@DOX-MIP nanoparticles. DOX is detected in the green channel. Nuclei and cell membranes are stained by DAPI in blue and PKH26 in red, respectively. (C) Viability of cancer cells labelled with Fe2O3@DOX-MIP after exposure to the alternative magnetic field (AMF at 700 kHz, 25 mT) for 0 min (no AMF), 30 min, 1 h 30 min, and 2 h 30 min compared to the control experiment (cancer cells labelled with Fe2O3 nanoparticles, at the same cellular iron dose, and exposed to the same conditions of AMF). The overall temperature during treatment was 37.5 °C for both conditions.

Prostatic cancer cells (PC-3) cancer cells were incubated for 2 hours with free DOX or DOX-loaded-MIP MNPs or NIP MNPs at fixed iron concentration ([Fe] = 2 mmol L−1, [DOX] = 5 μmol L−1 and [Fe] = 5 mmol L−1, [DOX] = 12.5 μmol L−1). Cell metabolic activity (Alamar Blue assay) was measured 24 hours after the incubation. First, NIP MNP internalization (without DOX) did not induce cancer cell death (in yellow in Fig. 5A), demonstrating that the hybrid nanomaterials synthesized are not toxic. Second, DOX- loaded-MIP MNPs have a high cell viability (in orange on Fig. 5A). Yet, at the corresponding DOX concentrations of 5 and 12.5 μmol L−1, the cell viability decreased to 30% and 50%, respectively, when free DOX was incubated with the cells (in blue on Fig. 5A). It thus evidences that DOX is well sequestered within the silica, and therefore inactive in terms of induced cell death, which also means very low risk for side effects. After AMF application (30 min at 470 kHz, 18 mT) to the cancer cells containing DOX-loaded-MIP MNPs, their viability was highly affected, with the cell viability reduced to 40 to 50% depending on the concentration of DOX loaded (in grey in Fig. 5A).

The most striking observation concerns the occurrence of nucleus DOX fluorescence in cancer cells incubated with DOX-loaded-MIP MNPs and submitted to AMF (Fig. 5B). It is remarkably increased by the application of an AMF. Moreover, it clearly appears on the microscopy images acquired 24 hours after AMF application that the cancer cells were damaged contrary to the cells not exposed to AMF, which present the same morphology as control cells.

Magnetic nanoparticles coated with MIPs are receiving an increasing attention thanks to their binding abilities, robustness and easy synthesis compared to their natural analogues also able to target protein, such as antibodies, or aptamers. Acting as tailor-made recognition systems, protein-specific molecularly imprinted polymers can be used in many in vivo nanomedicine applications, such as targeted drug delivery, biosensing and tissue engineering. Nonetheless, studies on their biocompatibility and long-term fate in biological environments are almost non-existent, although these questions have to be addressed before considering clinical applications. To alleviate this lack of knowledge, we proposed to monitor the effect of a molecularly imprinted polymer coating on the biodegradation of magnetic iron oxide nanoparticles in a model of cartilage tissue formed by differentiated human mesenchymal stem cells (MSC).[14] 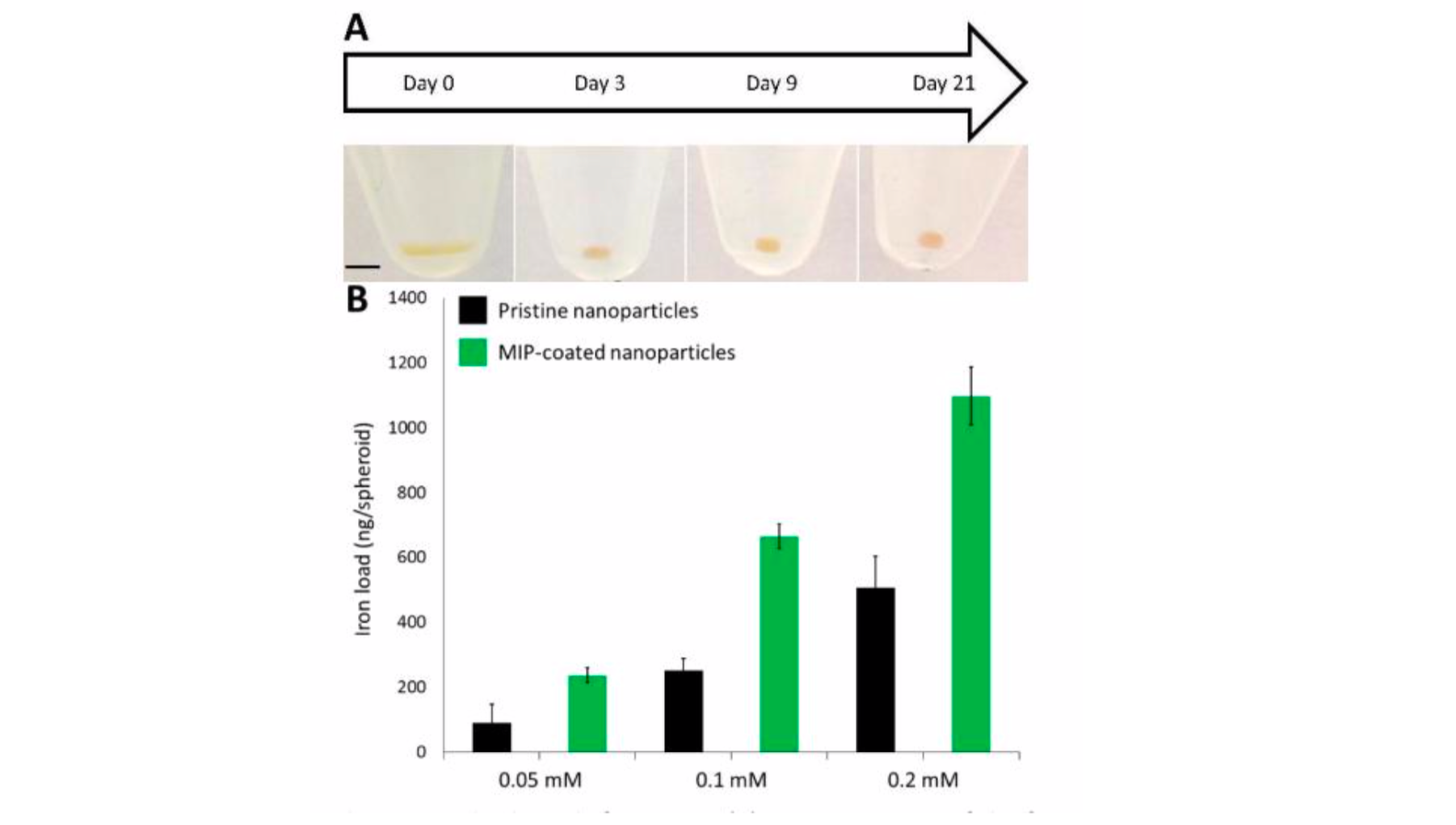 Figure 6. Nano-objects internalization and spheroids formation. (A) Camera images of the formation and maturation of a single representative spheroid. From day 0 to day 21, the spheroid matures and rounds up (scale bar: 2 mm, same on all images). (B) Iron load of spheroids formed after internalization of bare or MIP-coated maghemite nanoparticles incubated at different initial iron concentrations ([Fe] = 0.05, 0.1 and 0.2 mM).

Iron oxide nanoparticles degradation with or without the polymer coating was monitored for a month by following their magnetic properties using vibrating sample magnetometry, and their morphology by transmission electron microscopy. We showed that the MIP-coating of magnetic iron oxide nanoparticles do not affect their biocompatibility or internalization inside cells. Remarkably, the imprinted polymer coating does not hinder the magnetic particles degradation, but seems to slow it down, although this effect is more visible when degradation occurs in the buffer medium than in cells. Hence, the results presented in this paper are really encouraging and open up the way to future applications of MIP-coated nanoparticles into the clinic.

Figure 7. Magnetic follow-up of the maghemite nanoparticles (bare and MIP-coated) degradation process in the model tissue. (A) Typical vibration curves obtained for a single spheroid on different days after spheroid formation using a vibrating sample magnetometer. These particular curves were obtained with spheroids having internalized MIP-coated nanoparticles. (B) Evolution of the saturation magnetization (normalized by its initial value) over time of spheroids after internalization of bare or MIP-coated maghemite nanoparticles. Student’s t-test was performed each day between the values obtained for bare and MIP-coated particles (*corresponds to p<0.05 and ** indicates p<0.01)

Figure 8. Cell viability assay (AlamarBlue test) preformed on both MSC and PC3 cells. Three concentrations of γ-Fe2O3@MIP nano-objects were incubated with both MSC and PC3 cells (equivalent in iron: 0.05, 0.1 and 0.2 mM / equivalent in polymer: 6.1, 12.2, 24.4 mg/mL), and in the same way, equivalent concentrations of iron nanoparticles and non-magnetic polymer nanoparticles were tested, while non-treated cells served as control. As displayed on Figure 3, after 24h the metabolic activity of both cell lines was only slightly affected by the magnetic imprinted polymers, as the γ-Fe2O3@MIP nano-objects did only show a cytotoxicity between 10-15% at the concentrations tested. Overall, these results confirm the high biocompatibility of the hybrid nano-objects and are promising for their future translation in the clinic. Furthermore, the low cytotoxicity of pristine and MIP-coated nano-objects on MSC cells, validate the next results regarding their long-term degradation.

To conclude, we synthesized for the first time a magnetic MIP material that shows an active release upon alternating mpagnetic field. The hybrid material is composed of magnetic cores that can locally heat under AMF and a MIP shell that can contain a drug, thanks to hydrogen bonding. The particles are not toxic and could be used for in vivo applications. Moreover, the magnetic cores disappear after 9 days in spheroids even if there is a polymer around it showing a diffusion process inside the polymer.